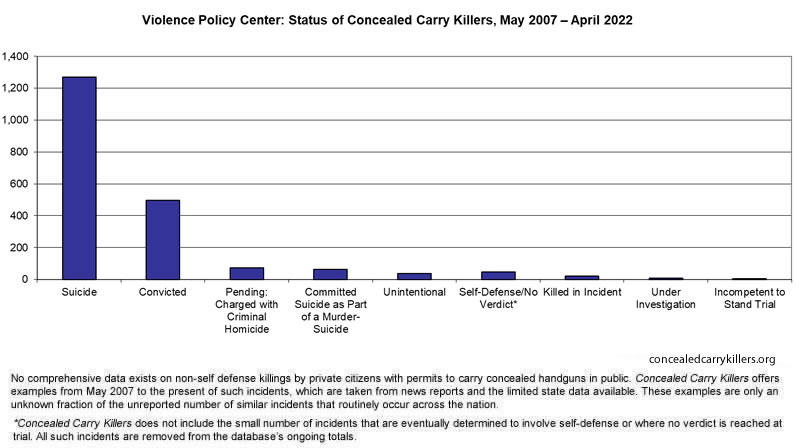 The result is a serious threat to public safety. Over and over again, the NRA and its allies have claimed that individuals legally allowed to carry concealed handguns pose no threat to the public. The evidence shows they are wrong.

In 1996, Tanya Metaksa, then-executive director of the National Rifle Association’s Institute for Legislative Action, stated at a press conference in Houston: “People who get permits in states which have fair right-to-carry laws are law-abiding, upstanding community leaders who merely seek to exercise their right to self-defense…These citizens don’t commit violent crimes.”

These false and unfounded claims continue to this day. In a 2010 opinion piece on FoxNews.com, concealed carry advocate John Lott stated: “Fears about accidents and rampages by permit holders, and blood running in the streets however never materialized where concealed carry has been allowed.” In 2014, Kevin Michalowski, executive editor of Concealed Carry Magazine, stated: “The concealed-carry permit people are good folks who simply want to defend themselves.”

Research by the Violence Policy Center (VPC) shows these claims are categorically false. Far too frequently, individuals with concealed carry permits commit homicides, commit suicide, or facilitate unintentional shootings. Meanwhile, the use of guns in self-defense is extremely rare. Since May 2007, the VPC has identified at least 37 mass shootings committed by a concealed handgun permit holder. There has been only one mass shooting in which a concealed carry handgun permit holder successfully intervened from 2000 through 2013, according to the Federal Bureau of Investigation report A Study of Active Shooter Incidents in the United States Between 2000 and 2013.

Concealed Carry Killers is an ongoing VPC research project that identifies fatal, non-self defense incidents from May 2007 to the present involving private citizens with permits to carry concealed handguns. Whenever possible, the Concealed Carry Killers database includes detailed vignettes describing the circumstances for each killing, listed by state. The descriptions of each killing also include the current, known status of any charges filed against the permit holder, and whether or not the perpetrator committed suicide.

The chart above shows the current tally of non-self defense killings involving private citizens with concealed carry permits from May 2007 to the present. This tally is updated regularly. The killings are broken out by specific categories and a killing may fit into more than one category.

Currently, Concealed Carry Killers documents 1,981 incidents in 40 states and the District of Columbia resulting in 2,240 deaths. In 94 percent of the incidents (1,856) the concealed carry killer committed suicide (1,271), has already been convicted (499), perpetrated a murder-suicide (64), or was killed in the incident (22). Of the 85 cases still pending, the vast majority (71) of concealed carry killers have been charged with criminal homicide, five were deemed incompetent to stand trial, and nine incidents are still under investigation. An additional 40 incidents were fatal unintentional shootings involving the gun of the concealed handgun permit holder. Twenty-four of the victims were law enforcement officers. Thirty-seven of the incidents were mass shootings, resulting in the deaths of 183 victims.

Concealed Carry Killers does not include the small number of incidents that are eventually determined to involve self-defense or where no verdict is reached at trial. All such incidents are removed from the database’s ongoing totals. Additional VPC research has shown that the use of guns in self-defense is extremely rare, whether the perpetrator has a concealed carry permit or not. In America, a gun is actually far more likely to be used in a homicide, suicide, or even stolen than used in a justifiable homicide.