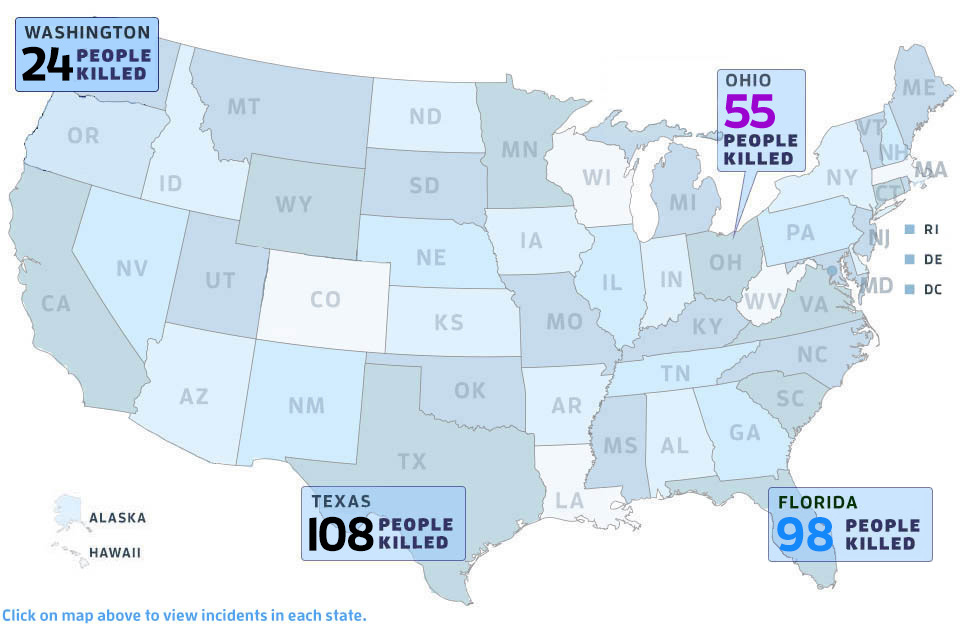 Concealed Carry Killers is a resource maintained by the Violence Policy Center that includes hundreds of examples of non-self defense killings by private citizens with permits to carry concealed, loaded handguns in public that took place since May 2007. These incidents include homicides, suicides, mass shootings, murder-suicides, lethal attacks on law enforcement, and unintentional deaths. Only a tiny fraction of these cases are ever ruled to be in self-defense. Any homicide that is legally determined to be in self-defense is documented and removed from the Concealed Carry Killers database and the ongoing tallies.

These incidents are only examples. There is no comprehensive federal database of concealed carry incidents, and some states even bar the release of such information by law. As a result, the examples in Concealed Carry Killers are taken primarily from news reports and from the reporting required in a few states. These examples represent an unknown fraction of similar incidents that routinely occur across the nation.

Currently, Concealed Carry Killers documents 1,981 incidents in 40 states and the District of Columbia resulting in 2,240 deaths. In 94 percent of the incidents (1,856) the concealed carry killer committed suicide (1,271), has already been convicted (499), perpetrated a murder-suicide (64), or was killed in the incident (22). Of the 85 cases still pending, the vast majority (71) of concealed carry killers have been charged with criminal homicide, five were deemed incompetent to stand trial, and nine incidents are still under investigation. An additional 40 incidents were fatal unintentional shootings involving the gun of the concealed handgun permit holder. Twenty-four of the victims were law enforcement officers. Thirty-seven of the incidents were mass shootings, resulting in the deaths of 183 victims.

More than just numbers, Concealed Carry Killers provides detailed accounts of lethal incidents involving concealed handgun permit holders. Whenever possible, this includes the names of the killers and victims, the legal status of the cases, and the circumstances of the incidents. To find out more, click on the numbers on the left-hand side to view nationwide information, and see the map above to view the incidents by state.